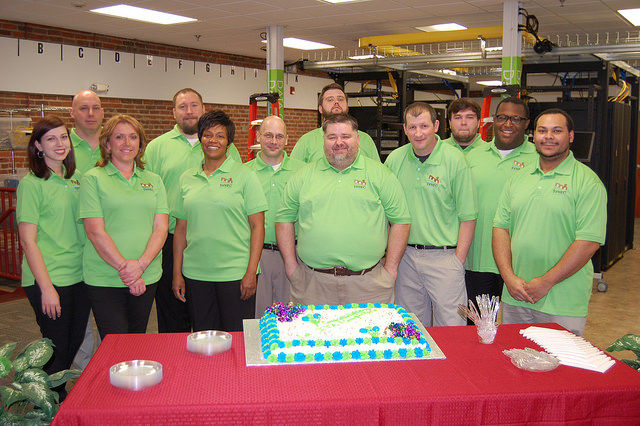 Six months after beginning classes in the Southern Virginia Higher Education Center’s (SVHEC) IT Academy, the region has 14 newly trained information technology (IT) professionals. The SVHEC recently held a completion ceremony to celebrate first cohort of IT Academy (ITA) students.

To date, program completers have earned 35 credentials, including the National Career Readiness Certificate, and most importantly, have seen their training lead to employment. Of the eight students who were looking for immediate jobs, six of them went to work at a regional datacenter as soon as their training was complete.

“I am extremely proud of our first group of students,” said Kelly Shotwell, IT academy project manager and trainer. “They remained focused on their goals and worked very hard throughout the entire five-month program. As a result, 75 percent of those seeking IT positions have already found work at either the data center in Boydton or Clarksville.  I believe this speaks to the dedication of the students and trainers, the relevancy of the program, and the willingness of area employers to be directly involved with our training efforts including hiring our IT Academy completers,” Shotwell added.

IT Academy participants complete hands-on lab exercises in a setting that mimics datacenter workplaces and finish the core curriculum within five months. Students in the first cohort traveled from across the region including Chase City, Sutherlin, Clover and North Carolina to take advantage of the short-term training.

Looking ahead, SVHEC and Southside Virginia Community College are developing a partnership that will allow students the option of receiving college credit for completing this workforce training program.

“The IT Academy provided me with a stable foundation of knowledge that not only increased my IT skills but also started me on the path to success in the world of IT,” ITA completer Myra Ragland said. “I am truly grateful and appreciative of those who supported the vision of the IT Academy and made it come to fruition in South Boston.  A special thank you goes out to Kelly Shotwell (project manager/trainer), Aaron Chandler (trainer) and Chris Morris (trainer) for their time, energy and devotion toward equipping each student with the necessary tools to achieve personal and professional goals,” she said.

The IT Academy is an initiative of the Southern Virginia Higher Education Center with funding from the Virginia Tobacco Region Revitalization Commission. Individuals interested in enrolling in the ITA including recent high school graduates, unemployed/dislocated workers, and career switchers should contact Shotwell at kellyshotwell@svhec.org, 434-572-5660 and toll free 1-800-283-0098 ext 5660.

STAGS and Bionic Eagles will compete in St. Louis April 27-30

South Boston, VA – April 13, 2016 – Two FIRST Robotics Competition (FRC) teams sponsored by Mid-Atlantic Broadband (MBC) have qualified for the FIRST FRC World Championship after competing at the FIRST Chesapeake District Championship in College Park, Maryland. The Piedmont Governor’s School STAGS and the Altavista Bionic Eagles are headed to St. Louis, Missouri at the end of this month to compete for the FRC World Championship title.

The Piedmont Governor’s School STAGS are currently in their thirteenth season and are based in Martinsville, Virginia.  In the 2016 season, this veteran team finished in second place as a District Event Finalist at the Southwest Virginia Event in Blacksburg, Virginia, received the Imagery Award at the Hampton Roads Event in Portsmouth, Virginia, and finished in second place as a District Championship Finalist at the FIRST Chesapeake District Championship held at the University of Maryland.  The STAGS are led by Mr. Brian Pace, Director of Piedmont Governor’s School for Science, Mathematics, and Technology.

Students participating in the FRC program are challenged in multiple fields, including electronics, programming, pneumatics, business/marketing, etc.  Each year, a new game is presented to the teams, giving these students the opportunity to expand their minds to create new solutions by becoming better thinkers and problem solvers. Teams have six weeks to design, build, code, and test a robot that executes the task that was presented to them for competition.

MBC is a strong advocate for the vision of workforce development in STEM-related fields, as these skills are highly desirable to companies and strengthen the workforce in Southern Virginia.  The success of these teams is a testament to the high quality skills possessed by the students, teachers, and industry mentors in Southern Virginia.

The STAGS and the Bionic Eagles will be a part of an international field at the FRC World Championship in St. Louis.  Hundreds of teams from across the globe will be represented, each vying to reveal who is the best of the best in the realm of FRC robotics.

“We are thrilled about the advancement of the STAGS and Bionic Eagles to the FRC World Championship competition,” said Tad Deriso, President and CEO of Mid-Atlantic Broadband.  “Their hard work, determination, willingness and excitement to learn new skills, and knowledge of how to thrive under pressure will serve them well at this competition and in all aspects of life.  We wish these Southern Virginia teams the best of luck at the championship event in St. Louis.”